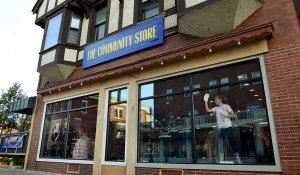 The New York Times reports today that  “A Town in New York Creates Its Own Department Store.”  In Saranac Lake, a picturesque Adirondacks town, the 5,000 residents  were watching their downtown steadily decline after the Ames department store went out of business.  It got so bad that they had to drive 50 miles for a pair of underwear.

A proposed WalMart created a debate about the direction of the community.  Some just wanted to get a pair of socks conveniently, and some were worried about the WalMart’s threat to the remaining local retail.  So rather than just block WalMart or do nothing (like most towns do), these people collectively invested $500,000 to build their own department store!

The article states:  “Think of it as the retail equivalent of the Green Bay Packers — a department store owned by its customers that will not pick up and leave when a better opportunity comes along or a corporate parent takes on too much debt.”

“Community-owned stores are fairly common in Britain, and not unfamiliar in the American West, where remote towns with dwindling populations find it hard to attract or keep businesses. But such stores are almost unknown on the densely populated East Coast. The Saranac Lake Community Store is the first in New York State, its organizers say, and communities in states from Maine to Vermont are watching it closely.” 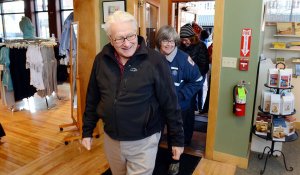 Opening day for The Community Store. Photo by Heather Ainsworth for the New York Times

“It drives me crazy when people criticize how our system works, but they don’t actually go out and try anything,” says Ed Pitts, a lawyer from Syracuse who along with his wife, Meredith Leonard, is a frequent visitor to the area and has invested in the store. “This is more authentic capitalism.”

Local retail matters.  I wrote a post about this a year ago: Why you are not a sap for buying high priced milk.  Yet, I hadn’t imagined a town taking the bull by the horns quite so directly. It’s inspiring.

6 Responses to “These 99% are doing something about it”